Cameron Smalls walked through the doors of Champion’s QUEST back in May of 2016 with goals of improving his speed, power, and agility. Cameron is a 10-year old multi-sport athlete, who plays soccer, baseball and basketball. His long-term aspirations are to play soccer or baseball in high school, college, and eventually professionally. 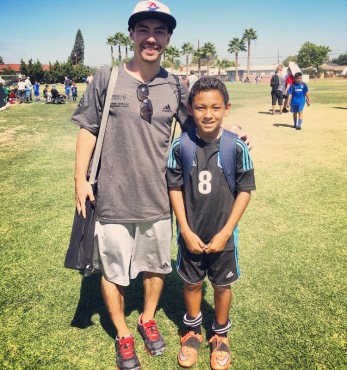 In just over 2 months of training, Cameron showed a 119% increase in his total athleticism. Cameron showed his biggest improvements in his agility, strength and speed. He lowered all three of his agility scores by 4 seconds. Cameron improved his linear agility from 15.39s to 10.69s and his lateral agility from 16.70 to 11.64, however his biggest improvement was shown in his single leg agility on his SST (shark skill test) by reducing his time from 12.59s to 7.88s! Single leg agility is crucial to soccer athletes as many technical aspects such as passing, trapping, dribbling, and shooting require one foot to be elevated off the ground while the other leg stabilizes the body.

Cameron also made huge strides in his strength as he improved his push up score from 45 to 51 repetitions in a minute and his pull up score from 4 to 7 repetitions! Cameron showed his biggest improvements in his core strength as he increase his plank hold time from 2:27 minutes to 4 minutes! Core strength is essential in soccer and other sports that require athletes to body up against opponents without losing their balance and center of mass.

All soccer athletes know how important speed is out on the field and it can be the difference between betting your opponent to the ball or gaining an extra step to be able to get off a shot on goal. Cameron improved his acceleration in his 10-yard sprint from 2.06s to 1.83s. He also showed improvements in his change of direction as he lowered his 5-10-5 test from 6.07s to 5.46s!

Cameron has recently joined the FC Premier club soccer team , where he plays for Coach Eddie Chavez’s 2005 flight 2 team. Cameron is a 2006 year birthday so he regularly plays against other soccer players who are a year older than he is to challenge him. At Champion’s QUEST, Cameron attends the B.A.S.E and Soccer clinics to develop his athleticism and skills out on the soccer field to compete against the older kids.

Keep up the hard work Cameron and I’m excited to watch your continued success!